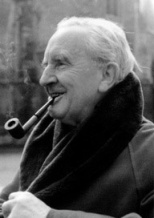 My version of The Hobbit was printed in 1977 and contains a forward by Peter S. Beagle that I thought was excellent. He concluded his forward with this:

For in the end it is Middle-earth and its dwellers that we love, not Tolkien’s considerable gifts in showing it to us. I said once that the world he charts was there long before him, and I still believe it. He is a great enough magician to tap our most common nightmares, daydreams, and twilight fancies, but he never invented them either: he found them a place to live, a green alternative to each day’s madness here in a poisoned world. We are raised to honor all the wrong explorers and discoverers – thieves planting flags, murders carrying crosses. Let us at last praise the colonizers of dreams.

View all posts by kentperkins